A baited banker thus desponds
From his own hand foresees his fall
They have his soul, who have his bonds
´tis like the writing on the wall

„The Run upon the Bankers“

The bold encroachers on the deep Gain by degrees huge tracts of land
Till Neptune, with one general sweep, Turns all again to barren strand.

The multitude’s capricious pranks Are said to represent the seas
Breaking the bankers and the banks, Resume their own whene’er they please.

Money, the life-blood of the nation, Corrupts and stagnates in the veins
Unless a proper circulation Its motion and its heat maintains.

Because ‚tis lordly not to pay, Quakers and aldermen in state
Like peers, have levees every day Of duns attending at their gate.

We want our money on the nail; The banker’s ruin’d if he pays:
They seem to act an ancient tale; The birds are met to strip the jays.

„Riches,“ the wisest monarch sings, „Make pinions for themselves to fly;“
They fly like bats on parchment wings, And geese their silver plumes supply.

No money left for squandering heirs! Bills turn the lenders into debtors:
The wish of Nero now is theirs, „That they had never known their letters.“

Conceive the works of midnight hags, Tormenting fools behind their backs:
Thus bankers, o’er their bills and bags, Sit squeezing images of wax.

Conceive the whole enchantment broke; The witches left in open air,
With power no more than other folk, Exposed with all their magic ware.

So powerful are a banker’s bills, Where creditors demand their due;
They break up counters, doors, and tills, And leave the empty chests in view.

Thus when an earthquake lets in light Upon the god of gold and hell,
Unable to endure the sight, He hides within his darkest cell.

As when a conjurer takes a lease From Satan for a term of years,
The tenant’s in a dismal case, Whene’er the bloody bond appears.

A baited banker thus desponds, From his own hand foresees his fall,
They have his soul, who have his bonds; ‚Tis like the writing on the wall.

How will the caitiff wretch be scared, When first he finds himself awake
At the last trumpet, unprepared, And all his grand account to make!

For in that universal call, Few bankers will to heaven be mounters;
They’ll cry, „Ye shops, upon us fall! Conceal and cover us, ye counters!“

When other hands the scales shall hold, And they, in men’s and angels‘ sight
Produced with all their bills and gold, „Weigh’d in the balance and found light!“ 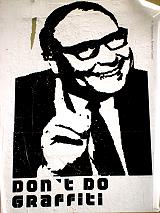